We detected that you're using an older version of Internet Explorer. please upgrade IE 11 or later

Alternatively, you can install and use these secure and newest browsers: Chrome | Firefox | Safari for MacOS | Edge for Windows

Frenectomy Treatment Near You 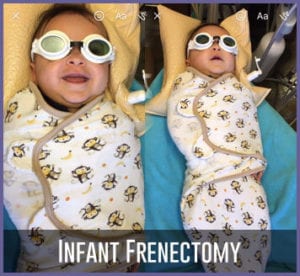 Patients in Gilbert with frenum problems may want to consider having a frenectomy near you performed by Dr. Hanna Mansoor. In a frenectomy, the muscular attachment between two separate tissues is cut to allow for more movement.

What Is a Frenectomy?

A frenum is a small piece of muscle that connects tissues. While there are frenum throughout the mouth, there are two kinds of frenum: the lingual frenum and the labial frenum.

In some cases, the frenum can be too tight. This causes a number of unpleasant symptoms, such as a gap between the two front teeth or an inability to move the tongue around.

By cutting through the frenum during the frenectomy procedure, Dr. Mansoor can give patients in Gilbert, AZ 85296 a better range of motion with their tongues and also help correct gaps between the front teeth.

What Are the Different Types of Frenectomy in the Mouth?

Lingual frenectomies often present in young children. Some of the first signs that might alert parents to a problem are an inability to nurse or feed from a bottle. As the child grows older, they might have trouble speaking, frequently becoming tongue-tied and stumbling over words. Because both parents and pediatricians might overlook these symptoms, problems with the lingual frenum are often not discovered until kindergarten or elementary school.

Left untreated, the lingual frenum will continue to cause children to have trouble speaking. Children may also have difficulties swallowing. Not all children have such drastic symptoms. Because of this, a lingual frenectomy is only performed in particularly stricken children or adults who never received treatment in their youth.

The procedure begins with Dr. Mansoor numbing the area surrounding the frenum, including the tongue. This prevents patients from feeling any pain during treatment. Then, she uses a laser to make a cut through the lingual frenum. To promote healing and ensure the area closes up properly, she will use the laser bandaid setting to help stop bleeding and promote faster healing. From start to finish, the entire procedure takes just a few minutes.

Afterward, patients in Gilbert, AZ 85296 might notice a bit of bleeding, swelling, or pain. However, over-the-counter pain medications and applying pressure with sterile gauze should decrease these symptoms. Patients must avoid rinsing out their mouths for 24 hours, and children should not be allowed to lie on their stomachs, as this puts pressure on the mouth.

Problems with the labial frenum can also appear in children, but they often aren’t treated until adulthood. This is because most doctors want to wait and see how a patient’s permanent teeth will come in before performing the surgery. In many cases, the tell-tale gap between the two front teeth goes away after the permanent teeth come in. Some doctors also like to wait until corrective orthodontics, such as braces, have been applied to try and maneuver the teeth into alignment.

If all these treatment options fail, Dr. Mansoor will perform a labial frenectomy to help. Patients near you with problems often have a labial frenum that is too long or wide and connects to the gums through the teeth. In some cases, the gums can even start to recede.

For the most part, labial frenectomies near you are a very similar procedure to lingual frenectomies. Dr. Mansoor will numb the area to prevent unpleasant sensations during the surgery. Next, she will use a laser to remove the frenum. Again, the procedure should take just a few minutes, after which the patient can go home to rest. In just a few days, the patient can return to normal activities.

What Are the Benefits of a Frenectomy in Gilbert, AZ 85296? 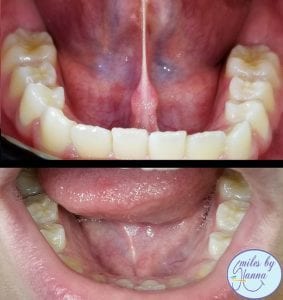 There are numerous benefits to both kinds of frenectomies. In particular, patients in the Gilbert area can experience some of the following benefits of a labial frenectomy:

Some benefits of a lingual frenectomy include:

Schedule a Frenectomy Procedure in Gilbert

For patients in Gilbert who feel they may require a frenectomy to improve their lives, Dr. Mansoor is here to help. She specializes in using only the latest technologies to reduce patient discomfort and increase results. Under her care, patients will be able to eat and speak better while also seeing an improved aesthetic appearance and reduced pain symptoms.

Contact Smiles By Hanna today to schedule your consultation at her Gilbert office near you by calling (480) 279-3700.

“Dr. Hanna was warm and helped me figure out what was best for my dental health. You can tell she really cares about her patients and all of their dental goals.” – Happy Patient
Read More Reviews

Please be aware that this is not a secure email network under HIPAA guidelines. Do not submit any personal or private information unless you are authorized and have voluntarily consented to do so. We are not liable for any HIPAA violations. Understand that if you email us, you are agreeing to the use of an unsecured method and understand that all replies will be sent in the same fashion, which you are hereby authorizing.